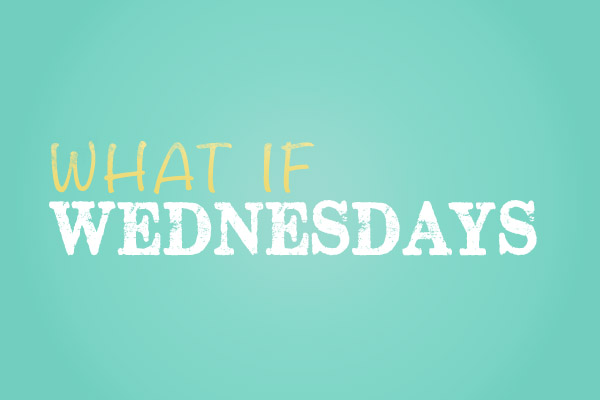 What if questions are my favorite things to ask. When I was a kid, my neighbors and I would come up with a handful of kooky scenarios, which we would often test and carry out in full force (What if we went to McDonald’s with lipstick scribbles on our faces? What if we ate fish food? What if we could cook eggs on the pavement?). When I entered advertising, I was delighted to hear that our brainstorming sessions would center around this one important question and its multiple variations: What if the world was ____, what if everyone  _____, what would you do if…?

I’ve been meaning to start a What if Wednesdays thing last year, but I just never got around to it. It is fortuitous then that New Year’s day falls on a Wednesday, so I took it as a sign that OK yes, I’m gonna do it. I’ve found that asking “what if” is a handy thing to do when you’re thinking of ideas. It’s a great way to attack a problem from different perspectives and come up with as many creative solutions as you can, no matter how absurd or crazy. Sometimes, it’s even the crazy ones that work.

And hey, it’s also a great way to blow off steam. When you’re tired of thinking about the serious things of life and just want to brainstorm all the insane and weird stuff that can happen to you, then “What if…” is always a good way to start. What if I wrote a poem about OT life? What if I drew a comic about my travels? What if I wrote a children’s book about something I saw on a blog?

Which brings me to the first successful What-if-transformed-into-reality story. A while back, I wrote about a workshop on writing for children’s books. It was also about my little sister Dani and her idea of a good story. She asked me this one simple question: “What would you do if you found a dragon’s egg?” I wrote the start of a story and never finished (tsk tsk). A couple of weeks later, though, I was surprised to receive an email from my mom’s friend, Ted Mendoza. He sent me a PDF file containing a comic book story entitled:

I was completely blown away. He told me that my post served as a writing prompt. In his email he wrote:

That really got me thinking …( a “dangerous past time,I know”)… and honestly, it bugged me so much I thought of making up a story…then one thing led to another and before I knew it I was sketching something for a “wordless” e-storybook.

I can’t post the whole story as Tito Ted has plans to have to published, but I can tell you that it is awesome. You can check out more of his artwork here

So see, there is power in asking “What If…?” It’s a simple question that can lead to a list of endless possibilities. I love how unpredictable the answers can be, how those two words can start off an insane brainstorming session that can lead to something memorable and inspiring, or leave you laughing ’til your stomach aches (trust me, I’ve had LOTS of that).

This new year would be a fantastic time to start asking multiple what ifs and breathe life into the ideas that come out of it. I’ll be posting a What If question biweekly to challenge myself, creatively, and put up whatever I come up with. If you (whoever you are) want to join in and contribute to the project, then go right ahead! Sky’s the limit! Come up with anything you’re comfortable with – a poem, short story, creative non-fiction piece, photo, essay, drawing, do whatever you want. You could even do a six-word story if you can. Leave a comment with a link back to your site or blog, and maybe you can include the tag What If Wednesdays. 🙂

I’ll be throwing in a couple of silly questions from time to time, so I hope you’re up for that. For this day’s What If, it will just be something light and easy. It’s New Year and all, but before we plunge into 2014, here’s a thought:

Here are a couple of things you could think about: What would time traveling be like for you? What would that specific moment be? How would you describe it and what exactly would you change? Could it be an important decision like saying yes to law school or even something as small as picking out the wrong skirt for an event or eating wholewheat bread instead of rice? Maybe something like bragging about your hair (that’s Dani’s answer…I really laughed out loud hahahaha)? How different would you be after that? Paint a picture and tell a story, I’d love to hear it.

I really don’t know if this will work, but I’d like to try and see how things pan out. This is my way of challenging myself to create new things and make good art. I hope the experience will be the same for you. Happy 2014, everyone! 🙂