The barge was parked on a stretch of pebbly sand off the coast of San Fernando. It was a massive structure, arresting not just for its size, but for its being locked on land. A few men were working on it, whether for refurbishing or refitting, I do not know. They told me only that it had taken six months and they were nearing its completion.

I watched as they worked even as they joked about my camera. They called out to their companions that I was on the lookout for the next big star. When they were focused on their tasks, however, there was a level of grace and steadiness in the way they carried out their job, mixed with a tinge of weariness that naturally comes from having labored on something for a long time.

I spent a good part of my Wednesday afternoon going around and taking photos of the site, flitting from one worker to another like a purposeful worker bee. I had to – I was under pressure to put together a photo essay for the Grid Travel Series, a four-day advanced photography workshop in La Union. Headed by some of the founders and top photographers of the travel magazine Grid, the workshop pushed participants to go out and search for stories in San Fernando and San Juan to turn into a photo essay.

I was lucky to have found this place. Though I was technically on assignment and therefore required to take photographs, it didn’t feel at all like work. The heat and harsh noon light made it challenging, but I sought refuge in the shade of a tree where a family lay resting and gazing off into the sea. The kids were friendly and chatty. I watched them run around and catch the birds that settled around their home. “Kalapati ‘yan,” said 9-year-old Arjo who was clearly the expert in the sport. Occasionally, they asked me to take pictures of them.

Photography is all about patience. I knew this already, but I had somehow forgotten over time, carelessly flicking away this crucial piece of knowledge for a quicker, more convenient way of capturing photographs. One that was more focused on instant gratification and Facebook/Instagram likes. Not to say that it’s a bad thing; I was just unaware of how much it had influenced the way I took my photographs. For months, I had grown bored of my own photos and I struggled to understand why.

But the workshop did a fine job of reminding me of what I loved most about this art. It’s the stories and the patience it takes to extract them from the clutter of everyday life. There’s a lot of luck involved, but you have to get through long stretches of unremarkable moments, of uneventful scenes before you can have those few magical frames. It’s all worth it in the end, though. And if there’s anything this workshop has given me, it’s a newfound respect for the craft I have often taken for granted.

It seems fitting then that I put together a photo essay (with the help of my awesome mentor, Miguel Nacianceno) on a place that demands grit, resilience, and most importantly, copious amounts of hard work and patience. Men at work. The work of men. The hard work that goes into a day’s work.

One of my favorite portraits here is of a welder who told me that he was also from Manila. He held the same job in the city, but had to stay in San Fernando for the entire duration of this project. Later on, during a break, he took off his protective gear and I was fascinated by his wardrobe: bell-bottom jeans, sando with a psychedelic print, and a silver chain necklace.

I wish I had gotten to know him better. I wish I had more than an afternoon in this construction site – heck, I wish I had been there six months earlier when they were just starting the repairs. But I was happy enough to have caught them at this particular moment in time – that delicate window of being there but not quite, when you can feel the end, but must go on steadily for a while longer. Just a little more, I imagine them saying amidst the clang of metal on metal, the grating noise of a welding torch. Isang linggo na lang. After all the work, the time, and the effort, after six months of battling with the elements, they can finally hang up their gears, shed their uniforms, and return home.

To view the photo essay in slide show, click on the photo in the top left corner. 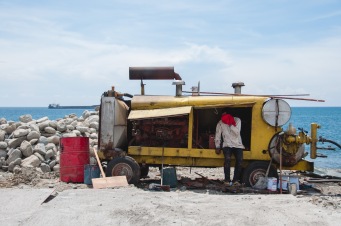