On the last morning of the year, we woke up to a dark sky and drove up a mountain in search of the sunrise. There were five of us in the Ford Everest: me, John, Jess and her two friends from grade school, Jap and Arielle. We approached a PNP checkpoint cautiously, hoping that a sleepy guard would not ask us to please turn back. Jess, a Baguio local and a good friend from college, told us that she had already been denied entry several times in the past. Two other vehicles went before us and we watched with bated breath as the first car stopped at the checkpoint. After a brief pause, though, it lurched forward and we gave a whoop as we followed up the curving road.

On the last morning of the year, we opened our windows as Jap’s Everest went upwards, the whole spread of Baguio laid out before us, its city lights twinkling like a nest of fireflies. “The stars are below!” Jess exclaimed. We stopped at the side of the road and took pictures in the dark – or at least tried to – and John and I discovered too late that we were not dressed warmly enough for the cold. (Luckily, I had a pair of thick, fuzzy bedroom socks with dog ears in my jacket pocket, which I gratefully put on). We tumbled back into the vehicle, thankful that it had a heater. 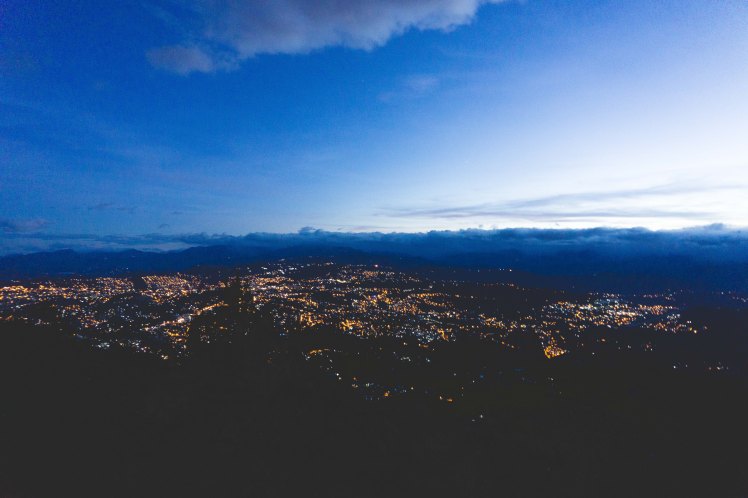 On the last morning of the year, we passed a second checkpoint, cut through waist-high mildewed grass on foot, and stood on a view deck with an unsatisfactory view of the east as we shivered in our damp bottoms. The wind didn’t help at all, and the lack of a wall to shield us from the cold distressed John, who did not have fuzzy dog socks to warm him. Jess called her informant, someone who worked in a nearby bed and breakfast. He told her that there was a better spot down the road – one with a bridge and a view of the sea. “The sea?” John asked. “Or did he mean a sea of clouds?” We laughed, thinking it likely. We spent a good ten minutes discussing whether we should go or not. What if we missed the sunrise? What if we don’t find this new place? But Jess reminded us that it was still twenty minutes to sunrise, according to Google Weather (“I believe in Google Weather!” she added). Arielle enthusiastically pointed out that even if we missed the sunrise it would still be an adventure. Finally, we agreed to go even if it meant getting our pants wet a second time around. 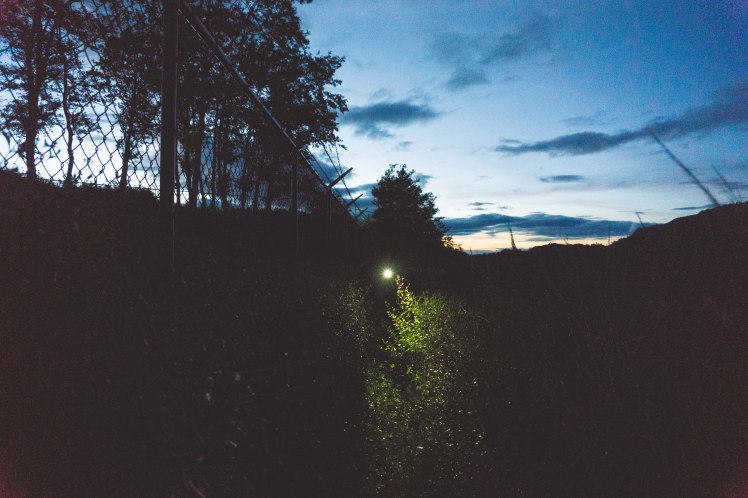 On the last morning of the year, we retraced our steps through an overgrown path and let the underbrush bless us with dew once again. With still twenty minutes to spare, we rushed back to the car and went searching for this Bridge By the Sea. The way was long and winding, but the mountain vista was spectacular. We passed through several bridges, even one that kind of fit the description. But each curve and bend brought with it the possibility of a better vantage point, and we kept going up and up. “Where are we headed?” someone asked, voicing my growing concern as we went higher still. “To heaven!” Jap answered. We rolled down the windows and stuffed our eyes with the scenery of peaceful mountain ranges and rolling clouds. This could easily be paradise, I thought, as we reached the end of the road. 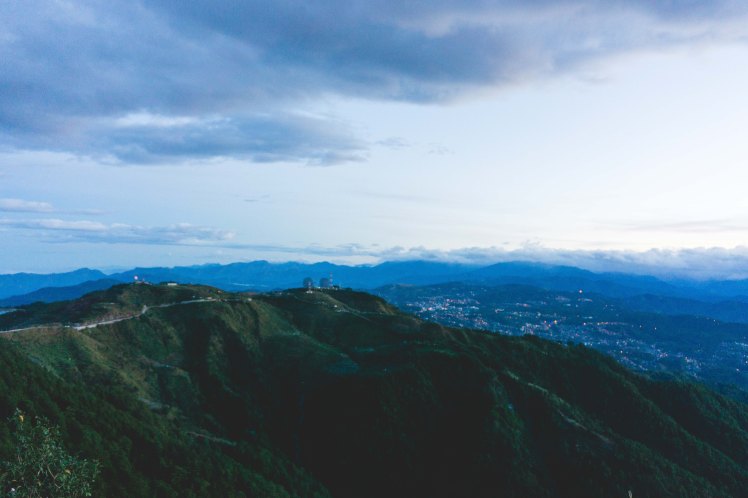 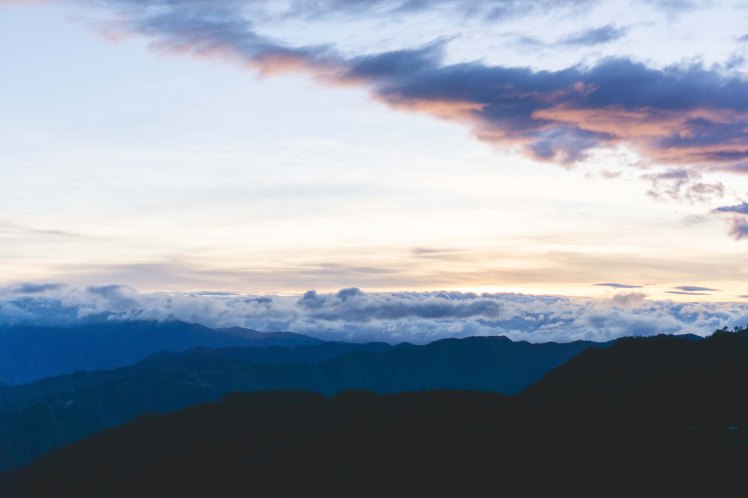 On the last morning of the year, we found ourselves at a dead end. It was five minutes ’til sunrise – as dictated by Google Weather – when we discovered that we had gone too far up, the east almost hidden behind the mountain peak. The road was too narrow for a u-turn, and the Everest was running low on gas. We got off and snapped some pictures while Jap tried to maneuver his SUV. Should we stick to this spot? Or go back down to that bridge with the better view? The questions hung in the air as Jap got the vehicle to turn in the right direction. We still had time, Jess told us, and that settled the matter. We went back to our trusty Everest, the heater now turned off to conserve gas, and flew to the bridge with the view of the sea. 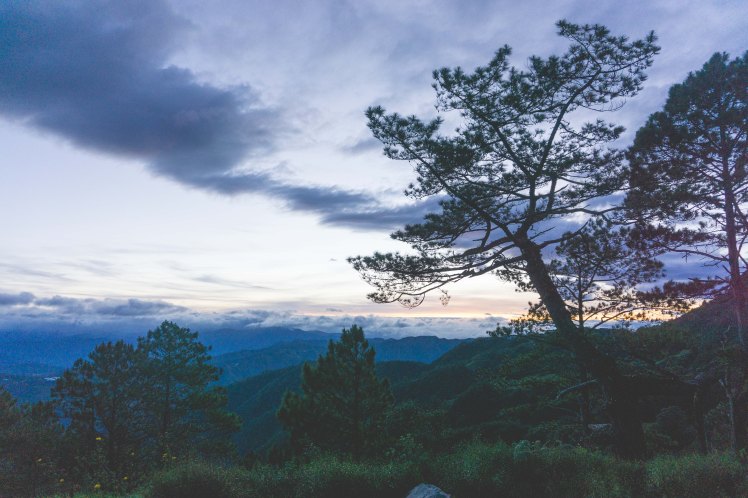 On the last morning of the year, we parked on the bridge, which turned out not to be a bridge at all, but more like a ridge with railings. The sun had not yet risen, but there was a soft light settling over the rich landscape, illuminating every shade of blue and green. Above the sloping mountain, covering the horizon like a blanket, was the great white sea. Our informant was right. There were clouds flowing thickly in the east, stretching far into the horizon. A look in the opposite direction, however, told us that he might have actually meant the La Union and the Lingayen Gulf, the gaping blue kissing the edges of Pangasinan and La Union. This meant that the ridge gave us a commanding view of two seas! As a reward for successfully discovering the site, we took pictures with the gorgeous sea as our backdrop. 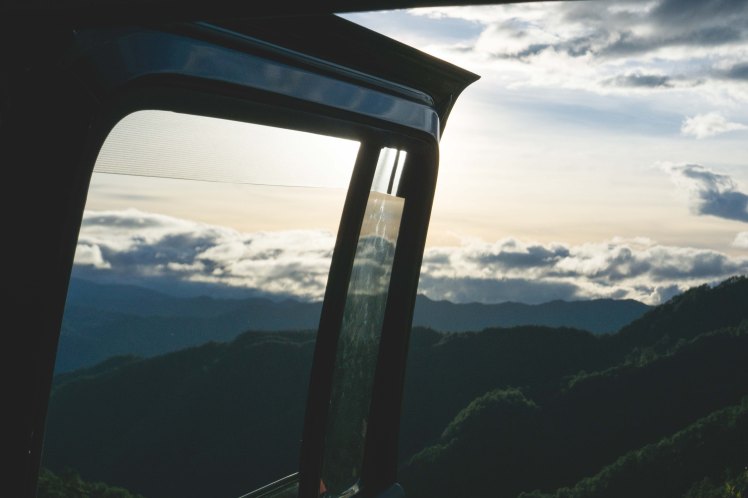 On the last morning of the year, the sun was late. It was 6:20 but it had not crested the sea of clouds. It remained as a bright spot at the rim, sending out yellow and orange rays. Nevertheless, we waited. We were patient. We had come this far and this early and we were getting a show no matter what. The cold persisted and made our fingers numb. The wind blew at our hair, tossing it this way and that. We hugged ourselves and steeled ourselves against the freezing temperature, but also made sure to take selfies as reminders of this brief self-inflicted physical torment. As we were cursing the cold, the sky blossomed, coming to life in light and color. It told us even before the sun came into full view that a new day was beginning. 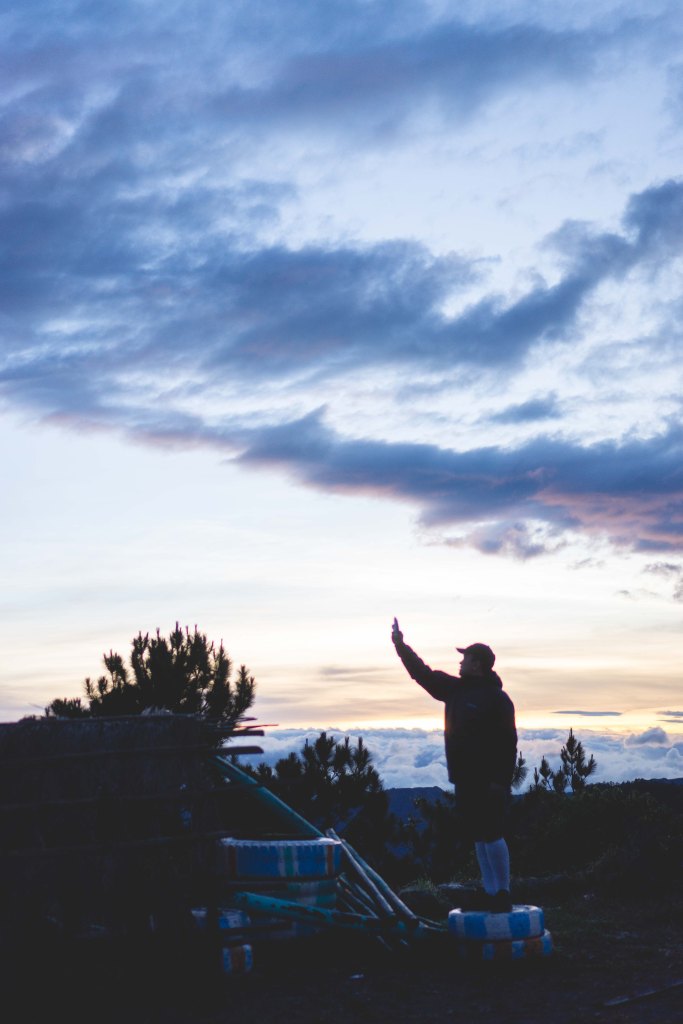 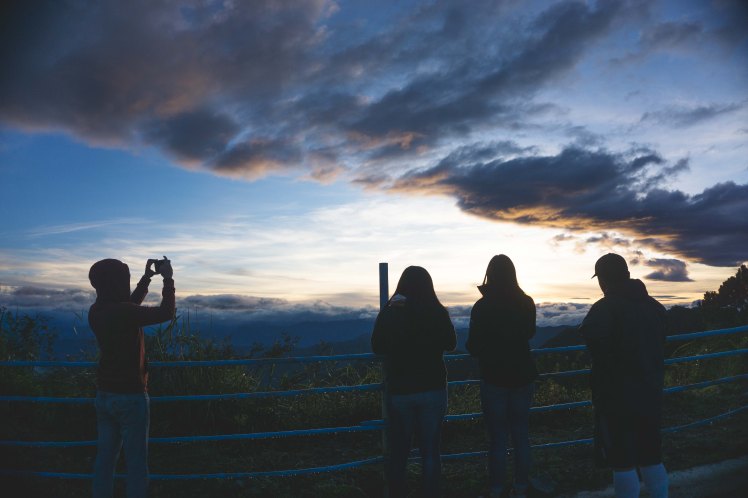 On the last morning of the year, the sun rose. It was 6:27 am and John was quick to tell Jess that her faith in Google Weather was misplaced, but it didn’t matter to anyone. The sun was there, we were there. We were surrounded by all things good and beautiful, and nothing mattered so much as this moment – not the cold, not our wet clothes, not our dangerously depleted gas, not even the thought that tomorrow will not only be a new day but a new year. At 6:27 AM, we were lucky to witness the breaking dawn on the last morning of the year. 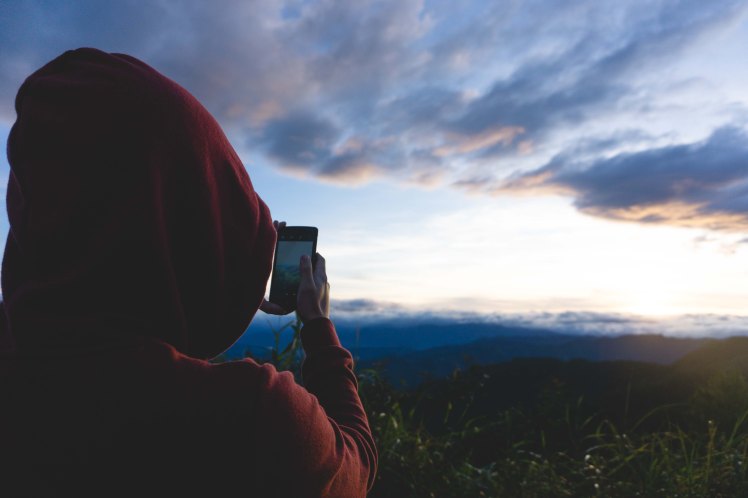 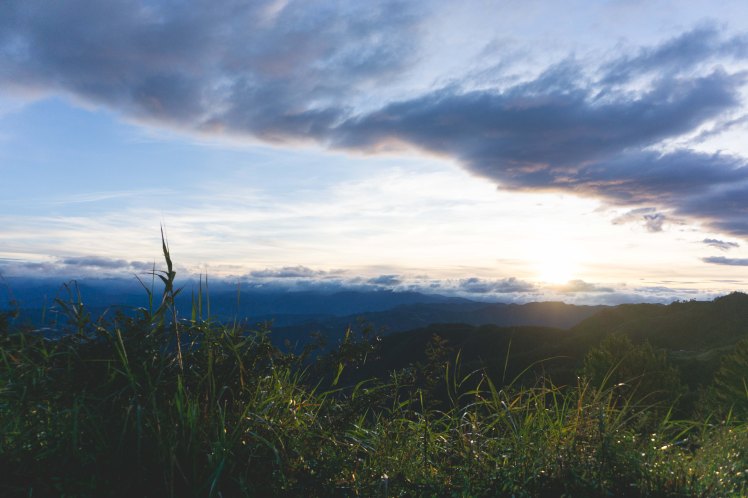 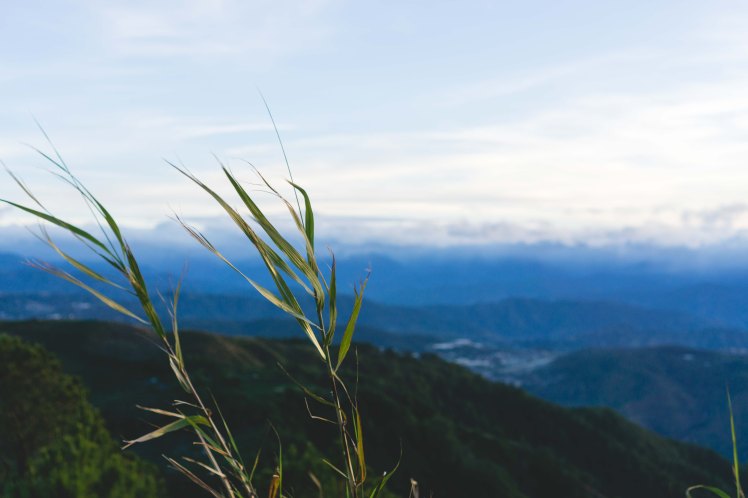 On the last morning of the year, as the sun rose higher above the clouds and shone on the (B)ridge Between Two Seas, we watched a new day begin and we were happy. When the quiet moment had passed, we shifted back into normal gear and went around taking photos, striking StockPhoto poses and a few serious ones for posterity. The winds made it increasingly hard to function and we grew hungry for a hot meal and a cup of coffee, so we retreated back into the vehicle and made our way to the Cafe in the Sky. 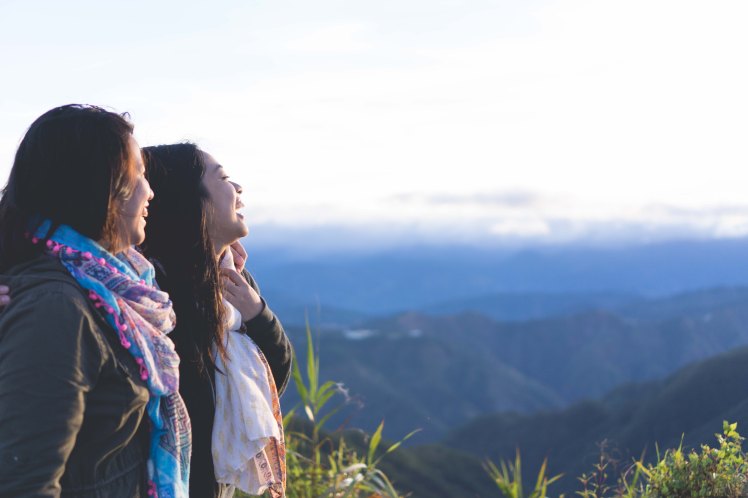 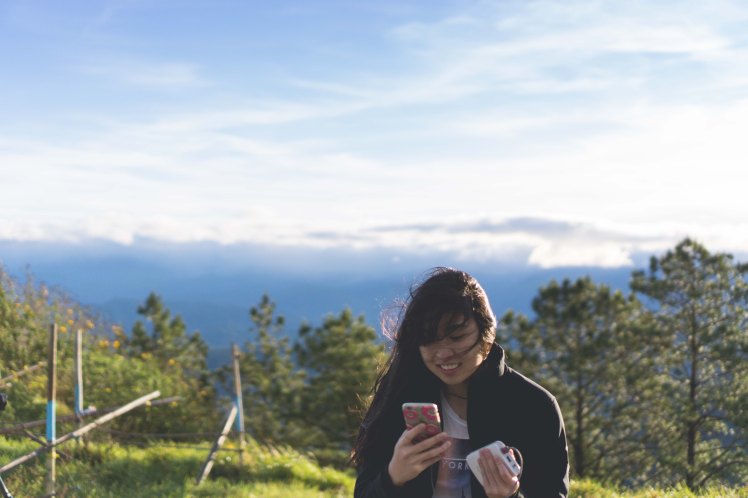 On the last morning of the year, we sat down in a cafe with an impressive view of Baguio City and discussed the Pinoy telenovela Forevermore as we gobbled down a hearty breakfast. The hot coffee was heavenly. We moved on to talk about other things such as most embarrassing moments, the bad Baguio traffic, and restaurant recommendations. The gas issue was resolved thanks to Jess’ informant, the same one who had told us about the bridge. While we were eating, he had taken a Wilkins bottle and traveled down to the city on a motorcycle to get fuel. He returned as we finished the last dregs of our coffee. 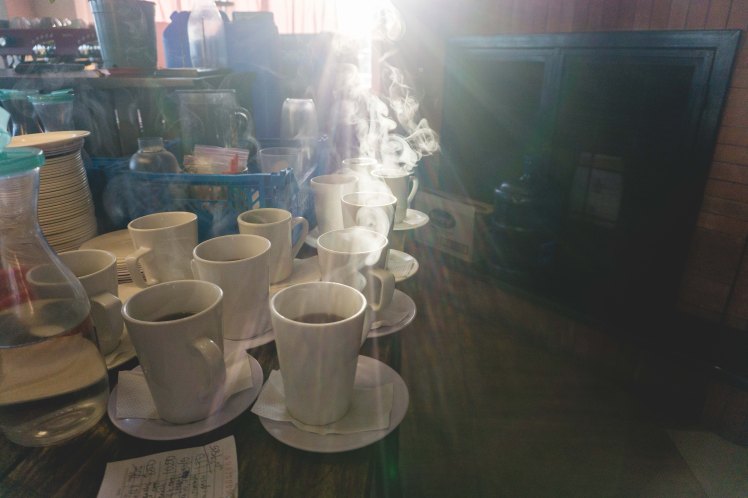 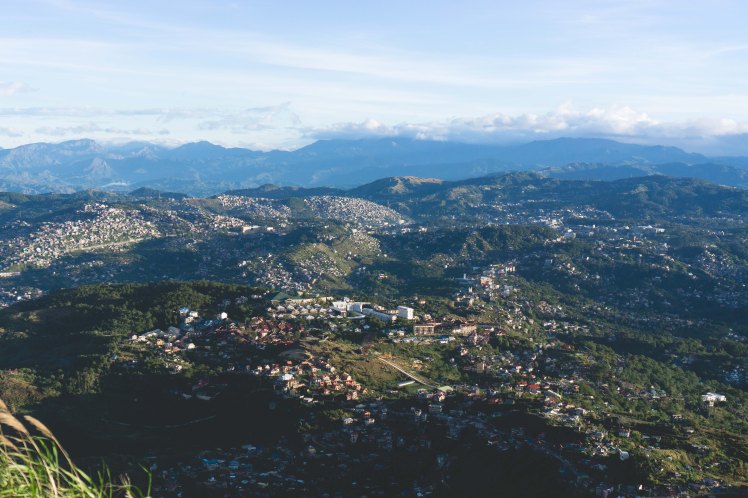 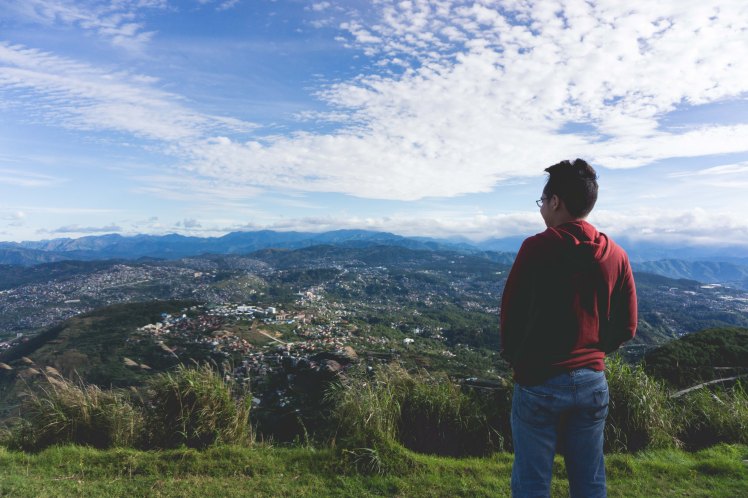 On the last morning of the year, we loaded gas into the Everest, said our goodbyes to the place (pictures and Boomerangs included), and made our way back down to Baguio, the sky already blue and bright. Just a few hours before, we had traveled up in darkness in trepidation, uncertain of what the morning would bring. John and I were strangers to Jess’ friends, but by the end of breakfast, we had warmed up to each other. As we swerved into a line of traffic and into the narrow streets of Baguio, we knew that the adventure was done. Tomorrow was to be a new day, a new year. What would it be like? Where would 2017 take us? Will it be pleasant? The questions nagged at me, causing me to squirm and worry. But the morning was not yet even over and we had a full day to go before the new year rolled in. Whatever everyone else in the car was thinking, we all agreed out loud that it was a fine start to the last morning of 2016, and a most fitting end for the year that was.